The 2016 Letter to Stakeholders (Year-end) @UniFAU

The 2016 Letter to Stakeholders (Year-end) @UniFAU

Welcome to the 2016 (year-end) letter to stakeholders of the Professorship of Open Source Software at the Friedrich-Alexander-University Erlangen-Nürnberg! (Download as PDF.)

Following a 2015 ICSE paper, we published two top-tier journal papers in 2016, one in Transactions on Software Engineering (TSE) and one in ACM Computing Surveys. The TSE paper led to a journal-first invited research talk at FSE 2016, next to ICSE one of the two top software engineering conferences.

For the first time, annual revenues soared past EUR 500,000. We expanded research staff to a total of six full-time researchers (“wissenschaftliche Mitarbeiter”), with an additional unfilled position for the time being. Since most of the revenues are from multi-year projects, revenues are already guaranteed to be higher in 2017, maintaining an annual growth rate of over 20% for the last four years.

Also, student numbers in our electives and final theses performed at the group kept growing and have been growing since the founding of the group.

Finally, we formalized The AMOS Project concept by way of the Uni1 startup. Uni1 takes the friction out of university-company collaboration in teaching and research projects by way of a market place, project management, and project portfolio management. Try it out at http://uni1.de!

The time-frame for the research section of this letter is the 2016 calendar year.

In the general domain of software engineering, we have projects and perform research on

In the domain of open source processes and models, we have projects and perform research on

We are currently engaged with one application topic, which is

The research methods topic is still evolving and centers on quality assurance in data analysis.

We published two top-tier journal articles in 2016, both on inner source:

While these two top-tier journal articles represent a delightful success, the group is still picking up speed (or should be). Beyond the two journal papers, we mostly published technical reports in 2016, in hopeful expectation of later journal papers.

Figure 1. Research publications per year by type since group founding

Among our research collaborations, the one with Prof. Minghui Zhou of Peking University stands out. She visited our group in early October 2016 for collaboration talks and review of existing work. We hope to build on our prior joint publications in the future. Prof. Zhou invited Prof. Riehle to the 99th Shonan Meeting, Japan, to take place in 2017. Shonan is Japan’s Dagstuhl.

We also intensified our collaboration talks with Malaysian universities, most notably MMU and USM and hope to formalize the relationship in 2017.

We kept up our regular reviewing services with leading journals and conferences and co-organized another OpenSym instance, this time again at Fraunhofer Gesellschaft in Berlin, see http://opensym.org.

Our ever popular course on agile methods, The AMOS Project, broke a new record and offered seven projects with industry partners in parallel. We were oversubscribed by industry and with more students could have done more projects.

The Alexander, FAU’s news magazine, reported with a two-page spread on one student project. It showed well the enthusiasm of our students and what they can achieve in the course of a semester-long project. Learn more at https://osr.cs.fau.de/2016/10/31/faus-alexander-reports-about-the-2016-amos-projects/.

In 2016, we also started a new course, on Free/Libre, and Open Source Software, called FLOSS. It was the most popular elective course we have taught so far, with over 100 students participating. We were surprised by the enthusiasm. The reader may wonder why we haven’t had this course for a long time, and the answer is rather simple: We felt we have to teach much more basic courses in software engineering to cover some of the deficiencies of our graduates before we could take on this elective. Now, if student vote by feet would count, we might be considered wrong!

Student numbers kept growing and we reached another record participation in our electives courses, as shown by the following graph. Course shorthands are explained in our course overview.

Figure 2: Number of students in elective courses (not cumulative)

This growing student interest was also reflected in the number of final theses performed with us. It is worth pointing out that we take a proportionally large share of Master (rather than Bachelor) students, presumably because our lectures are not part of the base curriculum and we are not seen by students during their Bachelor days. These numbers are also not cumulative.

The time-frame for the industry section of this letter is the 2016 calendar year.

It was another busy year for Prof. Riehle, engaging with industry. He gave more than 25 talks, on average one every second week of the year.

The first formal point of contact for industry partners with our group are often teaching projects (“Lehrprojekte”). In these projects, companies sponsor the topic of exercise for a project course and thereby engage with us and students. In AMOS, our agile methods course, this year’s industry partners were Sivantos, Develop Group, AVL DiTest, Senacor, Siemens CT, knowis, and Continental. In ARCH, our course on software architecture, the industry partner was SerNet.

Taking the next step, Healthineers, Siemens Digital Factory, Continental Corporation, and one unnamed (required by contract) company sponsored research projects on open source and inner source. The projects started during the course of the year and are all expected to run for three years, or longer.

One of the students, Matthias Lugert, now graduated, decided to stay with us and is now leading the Uni1 startup. Waiting for EXIST funding, the startup has not been founded yet, but we are actively testing the waters at http://uni1.de.

The time-frame for the fundraising section of this letter is the 2016 calendar year.

The 2016 revenues of the research group were EUR 524,590. If nothing changes and we just stick with the current projects, revenues in 2017 will be EUR 618,385, representing a steady five-year climb of more than 20% growth each year. We hope to exceed this baseline.

Figure 4. Revenues over time (not cumulative)

As is typical for universities, expenses closely trail revenues, as most of the income goes to paying salaries to employ researchers (“wissenschaftliche Mitarbeiter”). This is also the case with our group.

Total taxes paid to the university (overhead and other expenses) were EUR 93,200 and are expected to jump sharply in 2017. We are doing our part to help keep the university afloat.

By the end of the 2015/16 academic year (September 2016), 62 of our 88 final thesis students had registered on our alumni network (currently a LinkedIn group pending better infrastructure support for alumni through the University).

Several alumni attended the 2016 alumni event, jointly sponsored by our research group and Appwork GmbH, which is run by two of our alumni, Thomas Rechenmacher and Daniel Wilhelm.

Photo 1. Taken at the Appwork office, where we held this year’s winter alumni event 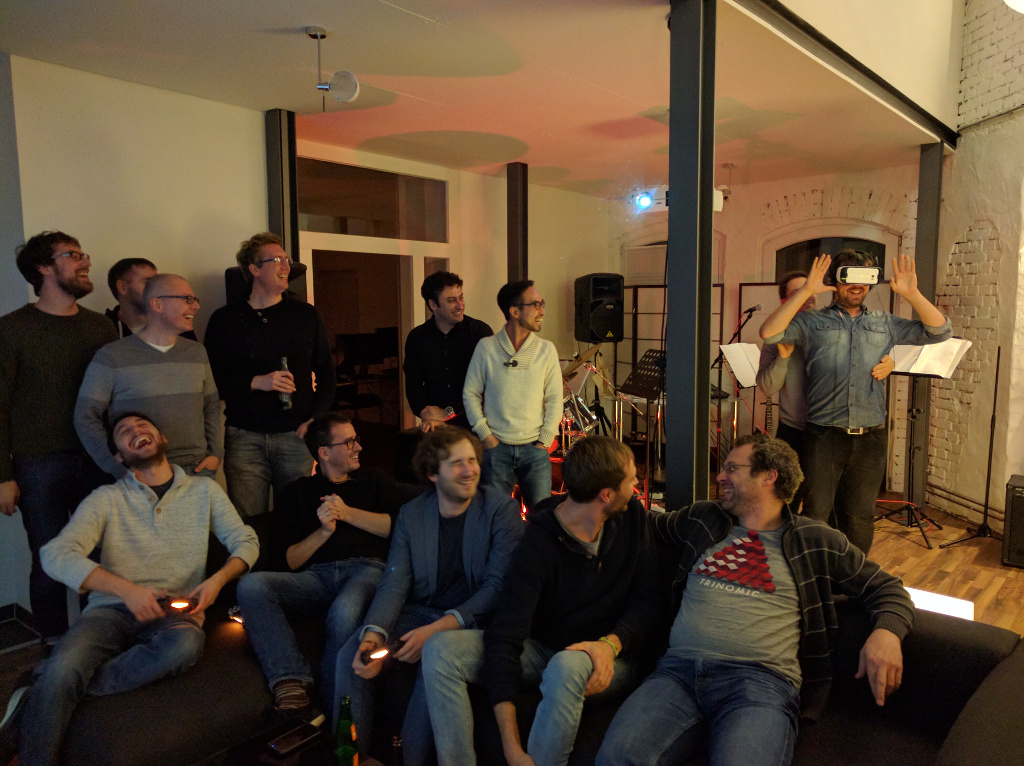 What is left for us is to say thank you to all our partners and colleagues and to wish you all a happy holidays and a most successful and rewarding 2017!

Photo 2. Taken in our kitchen Oct 2016, with guest Prof. Minghui Zhou of Peking University, to the left 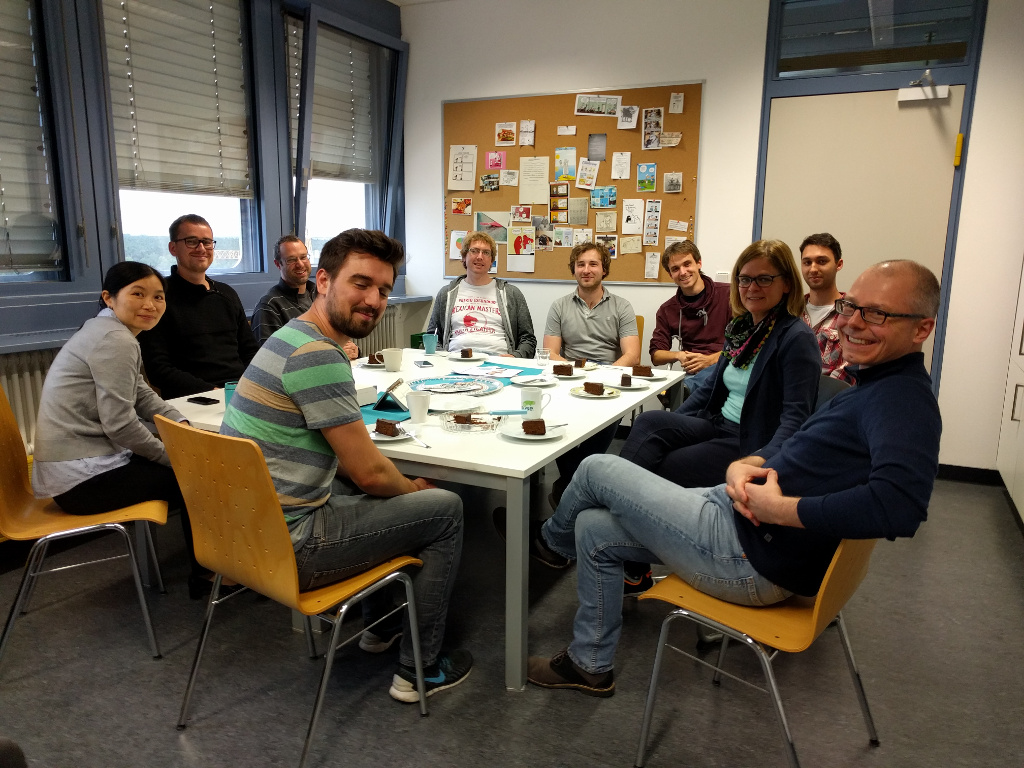 For the Professorship of Open Source Software,